I was so conflicted about this post, but remembering my previous post on not forcing myself to read books I’m not enjoying (Giving Up On Books) I knew that I had to be honest. DNF reviews are tough, but I think they’re just as valid as other reviews. I haven’t given a rating for Red Sister a rating specifically because I didn’t finish it, but even so, here are some brief thoughts on why Red Sister didn’t work for me.

I was really looking forward to Red Sister. For one, I judge books by their covers, and the cover of this book felt inspiring. I wanted to know the story of the girl on the cover. Further, the convent of the setting really excited me, with the promise of lots of women living in close quarters, and together with them fantasy world and the fact that the nuns in the convent are not normal nuns, but murderous nuns, I could not wait.

Unfortunately, these various aspects just didn’t slot in properly for me and Red Sister fell flat from pretty much the first chapter (I’ll excuse the prologue from this, because with an opening sentence of “It is important, when killing a nun, to ensure that you bring an army of sufficient size. For Sister Thorn of the Sweet Mercy Convent, Lano Tacsis brought two hundred men” it was definitely not boring. It’s a shame that the rest of the book didn’t feel this inspiring. The first third follows a young girl Nona as she is rescued from being executed for murder by a nun, Abbess Glass, and taken to the Sweet Mercy Convent. At the point of DNF-ing, Nona had been at the convent for only one day, but it felt like I had been reading for months. We went to various classes with Nona, heard her telling other girls her life story various times, meeting other girls, but it all blurred together into something vague and foggy that I couldn’t figure out. As I was reading these scenes, I kept finding myself wondering what the point of them were. Was there a meaning to the conversation? Why is this character important? But as various scenes came and went without any apparent plot, I just lost interest.

I could have kept going with the weak plot if the characters had grasped my attention, but they also fell flat in my opinion. Nona was interesting in terms of her story, and there were moments where my interest was piqued, such as a moment where she challenges a nun in a lesson, but generally she just felt like an empty space and didn’t bring much to the scene. To be honest, there were complete passages where I was completely unaware of what Nona was doing, what she was thinking, or even that she was there – which is surely not what is supposed to happen with the protagonist. The other characters, the nuns and the other novices were bland and one-dimensional, and they all felt like the initial ideas behind really good characters, but they just didn’t feel alive on the page.

This book had so much potential and I wish that I could have enjoyed it. I wanted the magic, the characters, and the setting to come to life, I wanted to be excited about nuns trained in the martial arts, but it just did not happen. The writing was not bad, rather, sometimes it was beautiful, but the story just felt dull on the page. I couldn’t make myself care about the characters or their story. Perhaps if I kept going, I would have found something to enjoy, but in my opinion, I had simply read enough of the book without encountering what it was I was looking for. 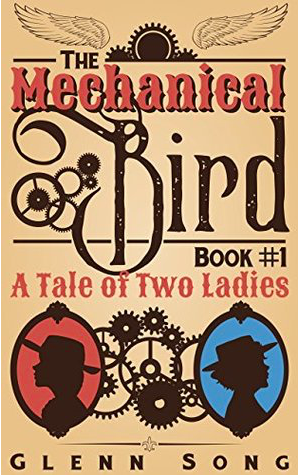 I was excited to read this for various reasons: it’s steampunk, includes two women grasping at the opportunity to attend university, and it’s the first book in a series. I was intrigued by the short length of this book and at just over 100 pages I was looking for a novella, but in fact, A Tale of Two Ladies felt more like the opening of a full-length novel than a story in itself, which is the reason for the low rating in this case.

Alicia and Elena are from very different worlds. Alicia is a country farm girl who has dreamed of flying since childhood. Elena is a noblewoman who loved mathematics but is being pushed into marriage by her traditional mother. When the kingdom goes to war, the university in the capital city of Aeterall opens its doors to women for the first time, and these two women both jump at the chance to chase their dreams. This story follows their journey to becoming students at the university, from filling in their applications to meeting briefly at the university’s entrance tests and interviews. I understand from the description that this is a serial, but personally, for me, there was not enough of a story arc in this book. I think that the first part of a series in particular should always have a self-contained story to it as well as being the beginning to an overarching story so that people can enjoy the book in and of itself, but this was just an opening to a larger story.

Apart from the flaws with the plot in this book, I really liked other aspects of this story, and definitely think that if it had been the opening to a full-length novel I would have kept reading. I was getting strong Anne of Green Gables vibes from Alicia’s character, who loves her family and seems to live partly in her dreams of flying. I also enjoyed Elena’s rebellious streak and her resistance to her mother’s choice of husband – there was also a moment with a biscuit that made me laugh out loud. The story in general, with two women from different walks of life meeting and clashing at university, also reminded me of Wicked, which I enjoyed. I liked how the two women clashed somewhat, but there was still a hint at a future relationship. However, I did have some issues with the character development, especially for Elena. She seemed smart and funny in the first half of the novel, but at the university she was suddenly socially awkward and incapable of verbal communication, which felt odd. I would have liked some more consistency here.

I definitely feel like Glenn Song has all of the ingredients for something really fun and exciting – the world-building was good, the steampunk concept was intriguing, and the characters are easy to get behind in their respective goals. With some tweaking, I think that this could be a great opening to a really interesting novel, but on its own, The Mechanical Bird: A Tale of Two Ladies just doesn’t stand up all that well.