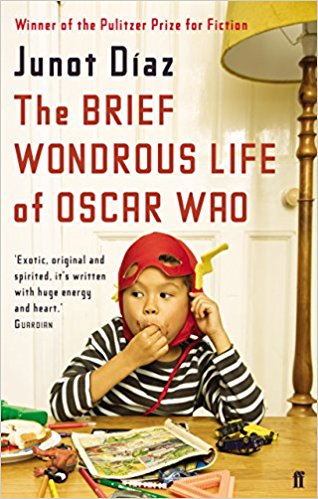 I have found it so hard to review this book because it is so unlike most of the books I have read. Junot Díaz’s writing is unique and effortless, it is a beautiful read and loved the intertwining of stories, but I sometimes felt like the overall story and unity of the various plots suffered under the weight of them all.

The Brief Wondrous Life of Oscar Wao is, obviously, about Oscar. He is an overweight, nerdy, and eternally lovesick Dominican boy who lives with his mother and sister. He wants desperately to experience love, and although he experiences it very often, he has yet to have it be returned. Díaz’s narrative spreads not only across Oscar’s formative years, but as far back as previous generations, exploring the curse, or Fuku, that they believe has overshadowed their lives for decades.

I did enjoy this aspect of intergenerational storytelling, and particularly in the context of talking about an immigrant Latino family, it felt very appropriate. In my own Latin American upbringing, I have always been raised to consider my family history to be as strong a part of my identity as my own likes and dislikes, so I could really relate to this method of exploring Oscar’s life and beliefs and the events that had formed him. The experiences of his relatives even years before directly impacted his life, and by the end, we not only see a clear chain of events across generations, but also wonder whether the Fuku is real.

The downside to this was that sometimes I just found this secondary stories to drag on a bit. There were things that I didn’t understand the importance of, meanwhile other storylines were left by the wayside and I would have liked to have had the chance to explore more. As interesting as the stories of the different characters were as standalone stories, and even though by their end I could see how they linked in to Oscar’s story, sometimes while reading them I felt lost in their story and struggled to see the importance of some of the detail. Also, despite understanding that these events and people formed Oscar’s own identity and life, I felt like Oscar’s own story at times felt weak. For example, the final chapters of his story felt simply silly at times, and whilst his neediness and desperation for love had been endearing, I simply grew frustrated with his narrow-mindedness and decisions, and the ending, rather than feeling poignant and moving, just felt a bit – dare I say it – stupid.

Overall, I do appreciate Junot Díaz’s talent in writing this book, and I do appreciate the various features of its structure and storytelling, but I simply didn’t like the plot. It felt disjointed at times, and the main plot and character disappointed me.